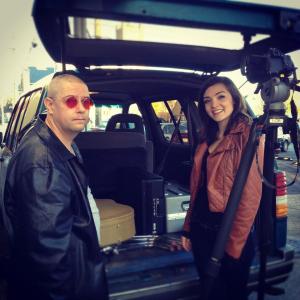 Turn about it fair play and as Kate acted for me in “The Red Room”, I acted for her in “Homeless Man”.  As such, I did not directly have anything to do with the production side of this short this time.  However, here are my thoughts and reflections on this short.

Kellie was very well organized and had a shot-list ready and knew what she needed and wanted to shoot the day of the filming.

Ole was working audio and although he did not have much experience with audio prior to this shoot, it was evident that what he had seen audio techs do on professional shoots had influenced how he handled himself.  I say this because he stepped up and was paying attention to the fact that he needed ambient sounds that I have not seen many of my other class-mates have made an effort to do while we are on location.  As such, I am fairly certain that Kellie will have a lot to work with in the way of car doors shutting, foot steps, keys jangling, and even the gear being wheeled across the parking lot.  There were many other instances of this but that gives you a fair example of what I am referring to.

Mark was crazy artistic as ever and employed his mad monkey skills to climb a fire-escape and get Kellie a sweet overhead shot of the van entering the alleyway.

Brian was also on par and ever the consummate professional, he helped make sure that Kellie got the light she needed via bounce boards in the alleyway.

Oh and on a personnel note, I shaved my head for Kate and Kellie so that I looked more like a drummer as my usual straight hair haircut did not look very drummer like.  I also bought some red shades and ended up looking like Woody Harrelson from “Natural Born Killers”.

It was also cool to work with Caz again as she was portraying Kate at a younger age.  Yes, this short is based on a life story from Kate.

All and all it was a fun shoot, we even got some shots out by Lake Monroe, where Eumi bravely stood in the rode as we drove my van by her so that we could get a cool traveling shot of the van by the water.  Anyway, those are my reflections on “Homeless Man”.