The third week of class went very smoothly, we made a lot of progress on many fronts this week.

We have all but two of the locations locked down.  The most difficult location is the dump.  We were not able to lock the BedfordRecycling location so we started looking at other options.  I did locate another possibility in town but after leaving two voicemails, I have not heard anything from the owner of that property.  We do have a back up plan in place so if all else fails we do have a way to film the scene with a dump backdrop.

We did lock the office scenes at Cardinal Stage. 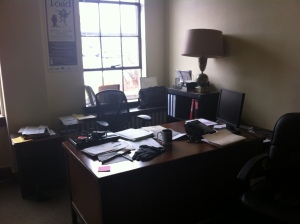 Cardinal Stage also is providing us with the rehearsal hall scenes so we owe them a huge thank you. 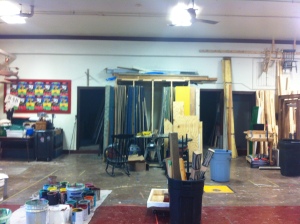 In addition to this, we locked the Buskirk Chumley Theatre so we have the dressing room location and possibly the lobby squared away. 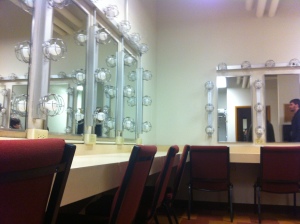 We also have locations for the interior and exterior of Nonie’s house.

The students also made a lot of progress and wrote two scripts for the promo-video for IndieGoGo.  Michael has been making more progress on all of the graphics and we also narrowed down what the title sequence will look like for the web series.  We have also made progress with both the audio and props.  We locked the costume designers.

Last but not least, Nick and I were able to rewrite the script into its fifth draft and I finally solved the elusive ending, which was driving me nuts.

All and all it has been a very busy and productive week.

We are now in week two of the class and pre-production.  Let me clarify, students have been assigned to specific production roles in a class that I developed with my advisor to promote learning in their specific jobs roles as if they might encounter in the industry.

For example, the Producers and Directors last week went with me and we did some location scouting.  Those students have now been asked to follow up with those locations to make arrangements for us to meet with the property owners of the locations where we would like to film.  One location that we were looking for was a dump that could double for a New York city dump from 1927.

Another thing that I had the audio students do was to create an audio map of the entire production so that they could start working on creating Foley sound effects in pre-production.  The camera group was assigned the task of bringing photos or videos of lighting examples and examples of shots that we may use in the production.  The production designer started compiling images for all of the graphic elements of the production from fonts to set decoration.  The script supervisor has been giving Nick and I coverage notes and we have been revising the script further from those notes.

We met as a class and had a general production meeting then we broke into groups and the Directors and Producers met with each of the production teams.  All and all it was a very good meeting and a good start to the production process.

On a side note, there is an observer who has now become an obstruction to the process.  This observer’s insights and experience are appreciated but given the format of the production meetings, the observer’s tangental comments are obstructing the process and in a small part undermining my authority.  I do have a plan of attack and will stop this from happening again next week.  Ultimately, if this plan does not work, I will ask this observer to leave so that the production may continue without obstruction.

Overall, I am very pleased with our current progress.  Nick and I made a lot of progress last week with the script and cut six pages of text, making the script much tighter and more visual as opposed to being bogged down in the dialogue.  Garrett has also been a huge help and we no have a Facebook page, Goggle account to share documents, and several other media sites that will make the process run smoother.  We have also collected all of the production team bios and headshots for Indiegogo and marketing purposes.

I am working on the PSA for the cattle call and I am just waiting to hear back from Tamera, the Graduate Assistant, about a room to hold the auditions.  Once I have that locked in place, I will be able to disseminate the PSA.

Well, that’s all from “Silence” for now.

I am officially in the throws of pre-production for my thesis production.  A web-series entitled “Silence” that Nick Krohn and I wrote.

New York (1927) – a Vaudeville team, realizing that Vaudeville is on the way out, decides to produce their first film: “King Lear”.  However, on the set of “King Lear” a random garbage man stumbles into their film and turns their drama into a slapstick comedy.  The comedy is a huge success and the company is faced with finding this garbage man to repeat their success and reap the riches or whether it is more important to them to pursue their art.

Yesterday, Nick and I went to Muncie and Anderson, Indiana and we were able to lock two key locations for the web series.

I am thrilled to announce that we will be filming in the historic Paramount Theatre in Anderson, IN and the Muncie Civic Theatre, which is an old Vaudeville theatre that was built in 1880.

Today after reworking the production schedule to accommodate the schedule of the actors and the venues, I sent out an offer to each actor.

I am currently working on writing more specific details for each assigned role in the production.

There will be more to follow over the coming weeks.